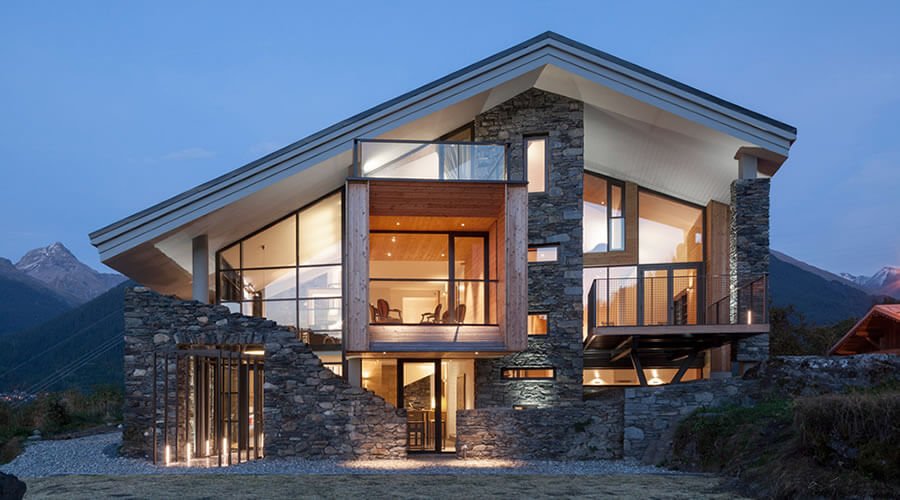 How to estimate residential construction costs

How to estimate residential construction costs during the architectural phase. The cost of architecture and its role a creative boundary for the work. By necessity, this discussion will be an oversimplification-a conceptual approach because architecture is unique, complicated and specific. Now, we will show you how we use a basic framework to inform the design process for our case-study project. Up Until this point We’ve only mentioned developing a project budget once, this was right before we began the schematic design phase. We mention how we directly linked the budget for our – in our case a residence – to the overall square footage of the home. We want to spend some times on this because although it’s not discussed in our training as architects in school, it’s part of the reality of making architecture in the real world and it’s one of the most basic and obvious concerns for both architects and clients. 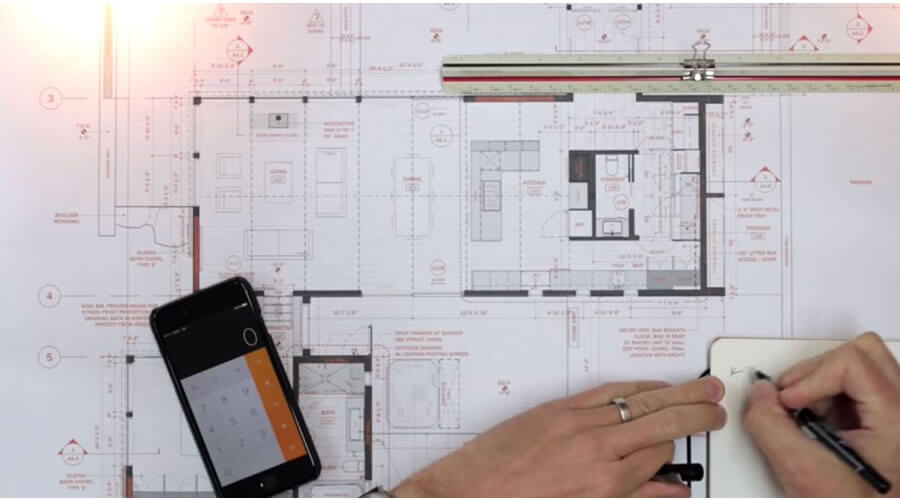 When we talk about the cost of architecture we typically break it out into one of two categories: there are soft costs and hard cost.
Soft costs are indirect costs of construction: Things like design fees, consultant fees for services like structural or civil engineers, lighting designers, energy auditors, and landscape architects, there’s also permitting fees, insurance, financing costs, special certification like LEED and often times legal fees.
Hard costs are essentially everything else related to the real cost of construction, the bricks, and mortar that make up the physical building.
The full cost of a project includes both hard and soft costs as well as any land acquisition costs. Soft costs can be defined by soliciting proposals from the agents’ involved architects will have a standard fee schedule: either a fixed fee calculated as a percentage of the cost of construction, an hourly fee model or some hybrid, some mix between both hourly in the beginning perhaps and then fixed once the scope is determined. Typical full-service design fees will range between five and twenty percent of the construction cost, as a general guideline, smaller projects will fall on the higher end of the percentage range and larger projects on the lower end. Hard costs will account for the majority of a building’s cost and the ones the design the architecture will have a considerable impact on, now, before we even begin a design, we evaluate the client’s hard to cost budget to determine whether it’s reasonable given their desired scope of work.

How to develop an estimated budget

Now, naturally at the beginning of a project, we know very little about the building so it’s not possible to do a detailed material take-off of the building components; we don’t even know what they are yet. Instead, we start to be developing a detailed accounting of the spaces. This is sort of a wish list, what architects call the program. From this list, we begin assigning room sized for each space. Knowing the overall size of the building will help us make sure the size needs correlates with the client’s target budget. But we have to get a little more granular than that if we want a useful budget figure to work with. To do that, we assign a multiple or factor to each space in the program. As you’d expect a living room with tall ceilings will cost more than one without tall ceilings; there’s more finishes, more labor, potentially more engineering and structural costs. And likewise, a deck or a covered porch area won’t be as costly to construct as finished interior space with few or no walls, no insulation no heat. By factoring the square footage of program spaces that are different than typical, conditioned interior space with an eight-foot-tall flat ceiling, we can more accurately develop an estimated budget for us to use as a decision-making tool.

As an example, let’s take a living room that’s twenty feet by twenty feet or four-hundred square feet. Our baseline space is a flat eight-foot tall ceiling. Spaces like these receive a factor of exactly one. So, the factored square footage and the actual square footage are equal. No, this is the case for most of the spaces in our case-study residential project. Let’s say one of our proposals included a vaulted ceiling in the living room. For this square footage, we’ll apply a factor of one point five which effectively increases the factored square footage total for this space. For the living room example, rather than four-hundred square feet, the vaulted ceiling would total six hundred square feet in our programming worksheet. We get that by taking four hundred and multiplying it by a factor of one point five. The spaces that we factor in the programming worksheet are as follows: first, garages, decks, and terraces are all factored at point live, screened porches or covered porches are factored at point-seven-five, and then there are any spaces with ceilings higher than the standard eight-feet are all factored at one-point-five.

How to estimate construction cost

Now, you’re probably wondering, why don’t we factor every space differently? After all hallway space and kitchen space they, they aren’t truly equal in terms of cost to construct but under this model, they’re treated as such. And while its frue kitchen space might be five-hundred dollars per square foot and the hallway space perhaps one hundred dollars per square foot there’s a whole lot less kitchen space than there is hallway space. It doesn’t make sense to do this kind of detailed tweaking because it presumes a level of precision that this kind of early estimate inherently lacks. In general, with this method, these inconsistencies will average out assuming you take care to apply the factors we mentioned. 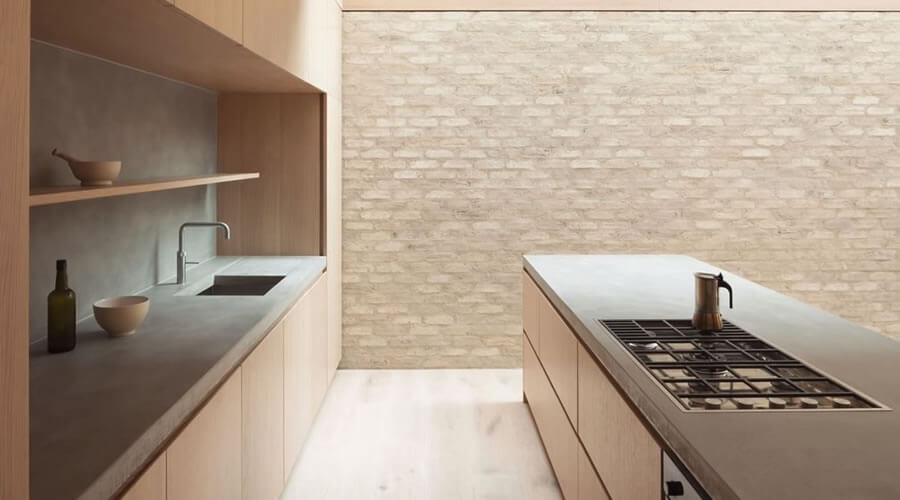 Now, Why does all this matter? Well, this is the key, remember the budget estimate early on we linked directly to square footage. Once we total all the square footage for the project we multiply that total by a cost to construct per square foot. Now, this number is always a range and this is for two reasons: first because before you even have a design; a range is a realistic means of portraying the variability of the potential costs involved. Second, because no two contractors will look at the design, the drawings, and the specifications the same way, even when given the exact same information. Equally, building techniques vary from contractor to contractor as do subcontracts and labor rates. 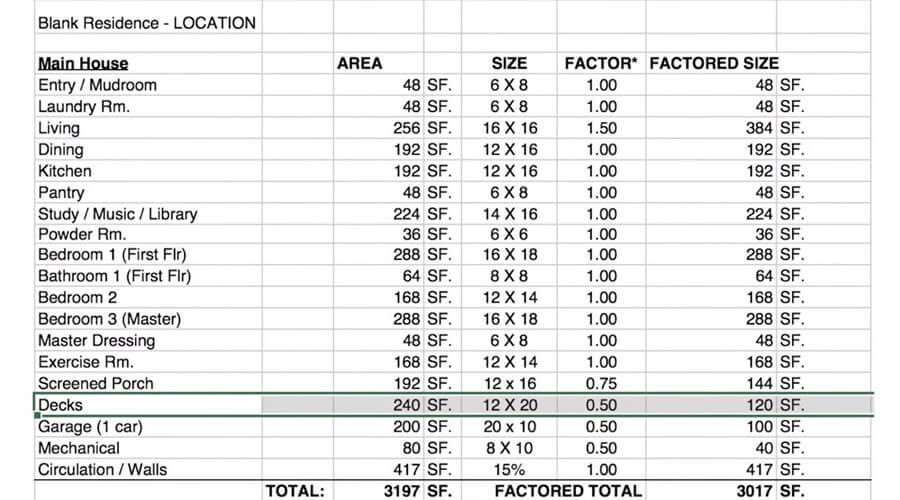 To cover these unforeseeable circumstances, always add a contingency to your estimates. A contingency is like a slush fund, a percentage of the contingency to your estimates. A contingency is like a slush fund, a percentage for the overall budget reserved unknowns. It starts out in the early phases of design as a rather high fifteen percent; there’s more at this point that we don’t know that we do know. Then we reduce it as we define more and more aspects of the structure from ten percent down to five percent. The more we know about the building, the more accurate our estimates can be and the less need we have for contingency. As the building progresses in construction we can begin to release some of the contingency funds back to the owner’s control – hopefully unspent. All this information help both the architect and the client to guide the scope decision. Before the design concept is established and before you start drawing lines, use the total budget to determine the overall building size the client’s budget will support. Doing this ensures the client isn’t surprised by the reality of construction costs – that sticker shock – and equally that the architect isn’t spending their fee designing something that the client ultimately can’t afford. 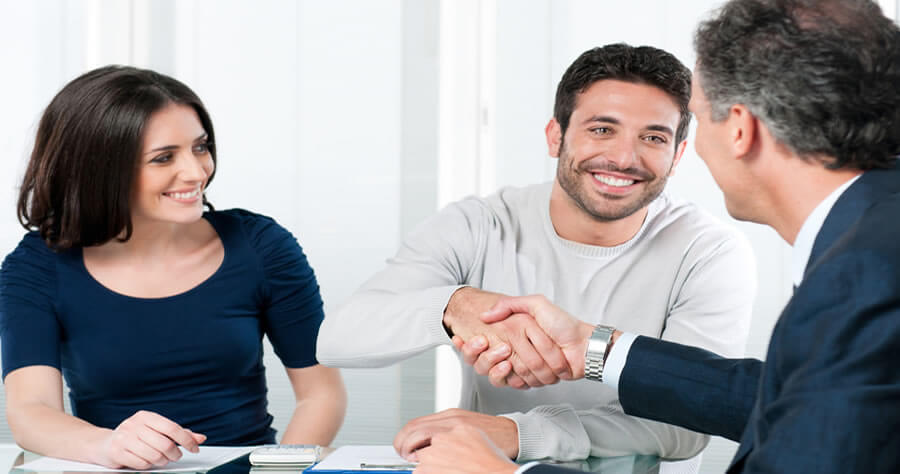 In the early stages of design, it’s nothing more than a best guess and its good practice to involve a contractor as a partner sooner rather than later to help evaluate costs. For larger projects, this process will likely involve a cost estimating consultant and it’s much more involved. But the concept is very similar. So how does all this relate to design? Well, the cost is an important creative boundary. Without cost limitations, anything is possible. When you begin to constrain the projects in various ways, new design opportunities will present themselves. Look for economies of scale, use humble, inexpensive materials, simplify design moves, do more with less, design spaces that can serve multiple functions, the question just how much space you actually need to accomplish a certain task. When you realize that every square foot costs between three and four hundred dollars it hold you accountable for each one in a much less abstract way. It’s why we regard building your own dwelling, at least for an architect, as an essential part of professional education. It forces you to experience the real costs and financial stakes involved in building.

Perhaps most importantly, every added square foot is another one you’ll have to heat, cool, light, maintain, and clean for many years to come. Buildings use an incredible amount of energy and here in the USA, our homes are substantially larger than our European counterparts. Be ruthless about what you really need and what you can live without. Be responsible, by consuming fewer resources your self-less act gives to generations that follow us.
Once we bring in a builder and begin defining more of the building details, the square footage estimate can be jettisoned and replaced by the builder’s estimate which will be refined at the major waypoints to ensure we’re proceeding according to the budget. During the early design, phases to be serious about controlling costs will most often reducing square footage. This will be the easiest and best opportunity you have to do so when the foundation has been poured and hammers are flying the amount of impact you can have on building cost is severely limited. Don’t think you can save money by simply changing materials at this stage, the bulk of your costs are tied up in square footage. This is the power law of the economics related to architectural design. As we translate our sketch plans into working floor plans, invariably the size changes.

Returning to our project, our client chose tow of the schematic plan schemes to hybridize and We developed a few plan options for each, to make things realistic, We translated the sketches into CAD line work which always has a sobering effect. Sketches are forgiving, they are easy to fake. But laying things out in CAD is different, you’re working with real sizes and alignments and wall thicknesses. Having roughed it out we massaged a few functional, if not rather primitive, floor plan options for the client to review. Now, as part of this process, thinks got longer. We spread it out on the site a little bit, bedrooms increased in size, hallways lengthened, and, when we revisited the square footage take-off, the footprint – and consequently the building cost – had increased significantly. So, again we retooled, and revised, made things smaller, pushing and lulling to align the two. In the end, there was an overall expansion of the programmed square footage. But, I’m happy to say that this was a client-driven decision, spaces were increased to accommodate certain wishes and desires and this too is the benefit of the programming and budget exercise. It allows the client to be in control of where and how they spend their project dollars.

It’s fine with me if they want to spend more or less, We are here to provide the information which allows them to make the most informed decision possible. Having a baseline tied to a budget keeps two in check. It’s always a good idea to revisit the square footage and cost estimates at different points in the design process, in the same back and forth manner as we do with the other aspects of our design.

Get A Free Quote