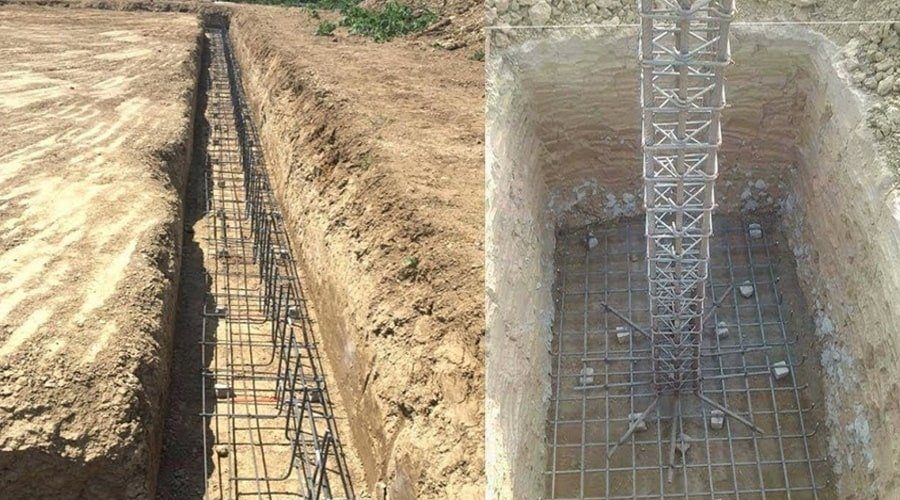 What is the meaning of foundations?

Foundation is the part of a building which is in direct contact with the ground to transmit and spread the loads from the building over a sufficient area of soil with the minimum allowable settlement.

Shallow foundations: Are foundations in which the layable terrain layer is close to the surface of the earth and bears the building loads to be constructed on.

They are foundations extending entirely below the walls of the building.

They are footings installed separately under the columns, each footing takes the concentrated load of the column and distributes it over a larger area so that the stresses on the soil does not exceed the safe bearing capacity of the soil.

They are footings installed under every two or more columns of a building, each footing takes the concentrated load of two columns and distributes it over a larger area so that the stresses on the soil does not exceed the safe bearing capacity of the soil.

It is a type of foundation that is placed on the entire surface of the ground beneath the building and serves as a single base on which to build the building.

This kind of foundations is used in case of the weak soil, so that the total building loads will be distributed over a larger area, or where columns are very near to each other, the usage of the isolated footing will result in touched footing which can’t be possible.

1. A raft of plain concrete with large thicknesses on which isolated footing is placed.

2. A large thickness of reinforced concrete, on which the columns rest directly.

3. A raft of reinforced slabs and beams (Inverted slab).

In the event of a structure with high loads and the surface layers of the soil not being able to carry it, it is necessary to resort to deep foundations where loads of the superstructure are transferred to a deep layer of soil with greater capacity to carry the loads.

Well foundation is foundations of plain concrete with a large height that flows into a well that is drilled to reach a deep layer of soil, then the reinforced bases of the structure are placed above those foundations.

A pile is defined as a long cylinder or squared of a strong material (wood, concrete or steel) that will be pushed or poured into the soil so that structures can be supported on the top of it.

Piles are usually used in the following cases:

Piles, in terms of the way they transfer loads, are divided into:

They are huge deep foundations of different shapes and dimensions

Factors that control the design of foundations:

The design of the foundations means defining its type (whether it is shallow or deep foundations) and its dimensions as well as the reinforcement.

Factors that control the design of the foundations are:

1- The value of the loads that the foundation transfers to the soil.

2- The bearing capacity of the soil.

3- Specifications of the used reinforced steel and concrete.

Factors that control the choice of a suitable foundation type for a building:

2- The purpose of the building (residential, administrative, warehouse):

There are so many types of soil that can bear high stresses, such as stone or rocky soil, and other types that bear fewer stresses, such as sandy or clayey soil. The suitable foundation for the building varies according to the type of soil at the site.