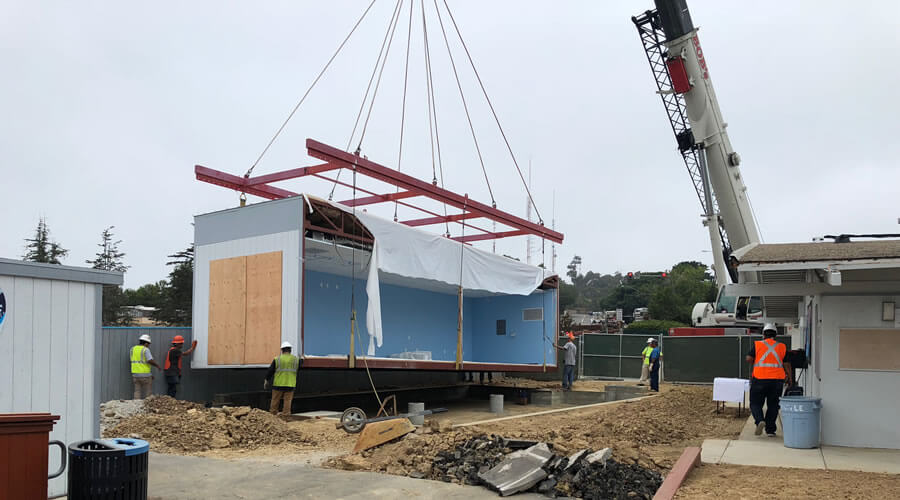 With the new school year kicking off, the students at French American Elementary School in La Jolla will find a new built Robotics Lab, with large glass panel roll-up doors, making it stand out from other school buildings. The School is working to upgrade its environment and make it more future-oriented.

French American School serves 365 Pre-K-8th grade students. The unique situation for this School is that it’s a privately funded school but on a property owned by San Diego Unified School District. As such, the project had to go through DSA (District of State Architect) process, a special neck breathing permit process set for Schools, to make sure everything is handled orderly and no room for errors and omissions.

The school was looking to set up a Robotics Lab, a technology classroom that should look special and standing out from other schools. It should attract school children and bring enthusiasm to learn better. They were determined to set up this new classroom before the end of August, requesting for modification and use as much glass work as possible in order to let sunlight to flow into the lab and provide a vivid educational space.

Francois Tregouet, the STEAM Coordinator and 3rd Grade teacher who is to going to teach the students in this new Classroom, came up with the new idea, to use as much glass as possible, and put garage glass panel doors.

The idea of garage glass panel roll-up doors was brought up in order to plant the idea that many innovations and great technologies are nurtured in garages in simple houses. However, it should be made of glass to be aesthetic as well.

So, there was a challenging project, constrained budget, tight timeline, no existing old drawings, and resources, but since the French American School is sited in a wealthy community, the parents of the students expected a high-end aesthetic building; an extraordinary project if not unique.

It was hard to find a contractor accepting this project. No one dared to undertake it. S3DA-Design, a San Diego based Design Company was the only contractor took all risks providing turnkey solution assisting the School. S3DA-Design entered as consultant and project manager for the School and started the Design phase.

The school was initially looking to utilize shipping containers to make the building extraordinary. But it was realized in the early stages that shipping containers are quite new and might not pass the DSA permit process. It would take months to get passed and would not be a good option cost wise.

S3DA-Design had to think out the best possible solution in reach to keep the School a continued source of pride for the French accredited schools worldwide.

Since the school wanted to have this new Classroom before the new 2018-2019 school year, the project was questioned many times. But the development office and the S3DA-Design were determined to realize this project. The process made up a team between the School and the contractor, working intensely and together.

Finally, the Modular building option seemed to be more feasible and the garage roll-up panel doors seemed to work in that type of building and within this timeframe.

The next challenge was the budget. As the School is a privately funded School, they organized a Gala in late March 2018. Parents were gathered and helped in the fundraising for this project in order to make it happen.

And now here it is, though it was a fast track project, started at early April and within 5 months, the building was set on the Campus on last Saturday and will be accomplished within the next days. It was a true running project which has now come to life due to the work ethic and determination of the school facility manager, the teacher and the parents along with the contractor, S3DA-Design, contributing in this project. It was truly a great project, all sides had a great impact, all forces joined together and made something impossible to happen. No one believed in this project except the one needed this classroom.

Your efforts result if you believe in what you’re doing! That’s the best lesson learned from this project.