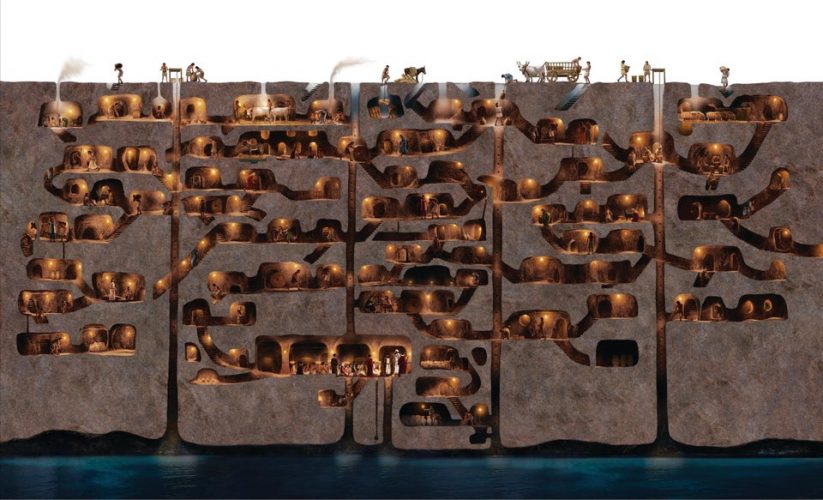 Building underground structures is no mean feat. When humans build down rather than, they face a myriad of challenges like soil issues, structural stability, and waterproofing problems. Despite these challenges, man has been able to undertake mind-blowing architectural projects below the earth. Let’s look at some of the deepest and most incredible underground structures around the world.

While many city dwellers go underground to catch the train in the subway, they probably don’t know others go even much deeper to catch the metro in Kiev, Ukraine. There is a subway that lies 346 feet underground, making it the deepest subway on earth. The reason is the town on which the station exists, Arsenala, rests on a tall mountain. But the next two stations on the other sides are at ground level. The subway goes right through the mountain, stops in the middle then exists on the other side of the mountain.

Built-in 1959, the Sydney Opera House is a multi-venue performing arts center and a famous landmark in Sydney. This iconic building hosts many events in a year. Underneath is an underground parking garage that also holds the record for the deepest basement. It lies 120 feet deep. The twelve-story parking garage lies 120 feet underground. The concrete structure is not an ordinary underground square. While the initial design envisaged a standard parking garage, fire regulations posed a challenge that made it difficult to create an ample parking area that was also safe.

Opened in 2016, the 35-miles long Gotthard Base Tunnel holds the record for the longest tunnel in the world. It cuts through the Swiss Alps and provides trains and vehicles with a flat route. Close to 28 million tons of rock were excavated and moved to create the tunnel. During construction, engineers had to contend with over 70 types of rocks, some as soft as sand and others as tough as granite. At its lowest point, the tunnel lies 8040 feet below the surface. The southern entrance is in Bodio while the northern is in Erstfeld.

Towering 1,070 above the ground, the Salesforce Tower is a famous landmark in San Francisco, CA. It has 61 stories and is supported by a solid foundation that goes 310 feet beneath the earth. What makes it unique is that the foundation was designed on a weak bedrock and complex soil strata. The foundation consists of a 14-foot thick concrete slab that covers an area about an acre wide. Over 49 million pounds of concrete was poured during construction. Engineers ensured the foundation was strong enough to support the massive weight of the building yet stable to withstand excessive settlement and seismic activity.

Over the ages, researchers and relic hunters have stumbled upon interesting ancient cities and structures. One city that has stood the test of time lies beneath Cappadocia, Turkey. The underground city dates back to 1200 B.C and goes 18 stories deep. It was discovered by a Turkish man who was knocking down the basement wall of his home in 1963. This opening led him to miles of tunnel that connect the caves of Derinkuyu to over 200 other underground cities, which were carved out of a volcanic rock. Since then, more than 600 entrances to the city have been discovered as well.

When looking to perform extremely sensitive tests or experiments, scientists prefer to go underground where cosmic radiation is extremely low. Down there, external factors won’t interfere with the test results as the cosmic noise reduces by a factor of 10 million. This is the inspiration behind the 7,900 foot deep Jinping underground lab, located in Sichuan, China. Scientists have been using this lab to research dark marks and neutronics. The facility is accessible via a horizontal road, meaning vehicles can get to the side without the need for an advanced transportation system.

These world’s largest man-made underground structures cut across different civilizations and geographic locations. And they show that no architectural challenge is too big a problem to surmount. A team of engineers and builders probably worked long hours and for many months to create these phenomenal structures that we’re now able to appreciate.

Irene Chen is the head editor for Content Geek, which showcases interesting, inspirational, and thought-provoking content.ContentGeek.com publishes infographics and articles across a wide range of topics, sourced from a community of designers, writers, and creators.