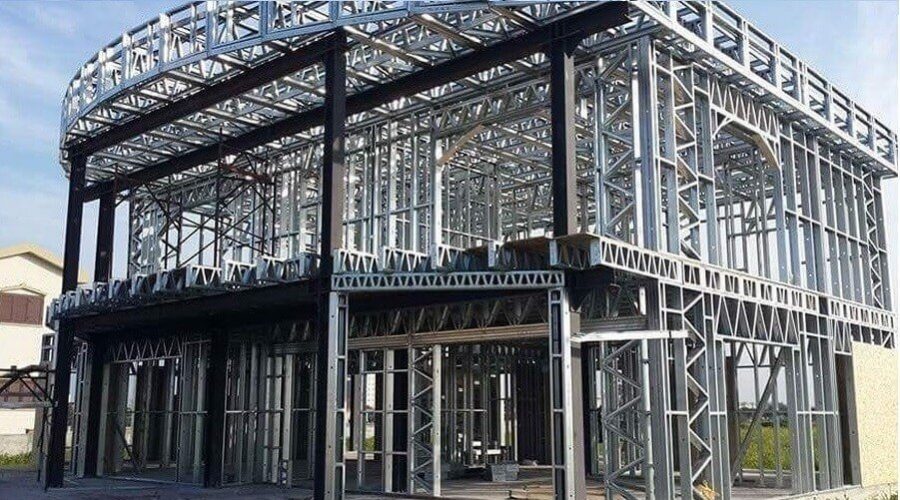 The basic principle of light gauge steel framing is that lightweight galvanized steel sections are used to form the structural members to carry vertical and lateral loads. It can be either used for the entire building or partially to support the external finishes, internal plasterboard, and floor and roof finishes.  Light gauge sections such as steel channels can be supplied to site as individual components to assemble in-situ or can be delivered as a modular component.

The question is that how it works to transfer vertical (dead, live and snow) and lateral (seismic & wind) loads?

As the vertical loads transferred by an assembly of closely spaced light gauge members (usually stud every 16 or 24 inches), the tying members used to ensure the entire assembly is effectively tied. The overall stability of the structure is provided by flat strap cross bracing distributed evenly throughout the external and internal walls as required to control movement under horizontal loads and incorporate a vertical bracing system to transfer loads to the foundations. The bracing is distributed such that no substantial portion of the structure is connected to a means of resisting horizontal forces at only one point.

How it can be used for large open spaces that need stronger members?

Understanding the mechanism of load transfer illustrate that needed solution for large open spaces (where is not closely studs and ties).

The solution can be using the larger sections, composite sections to improve the strength of the supporting members but the more important factor is the mechanism of the load transferring lead to a successful structure. In other words, the conventional role of construction doesn’t cover all requirements, especially custom homes, large spans and eccentric load-bearing wall for multi-story buildings. That requires professional engineering design to find a specific solution answering to architectural requirements, structural integrity and total cost of the building.

Using hot rolled steel beams and columns incorporated into and suitably tied to the cold-rolled steel especially for lateral loads (mostly effected by wind load for lightweight building) is the best solution. Usually, these members are assembled as a picture frame or goal frame and concentrate the load should be considered on the foundation design.