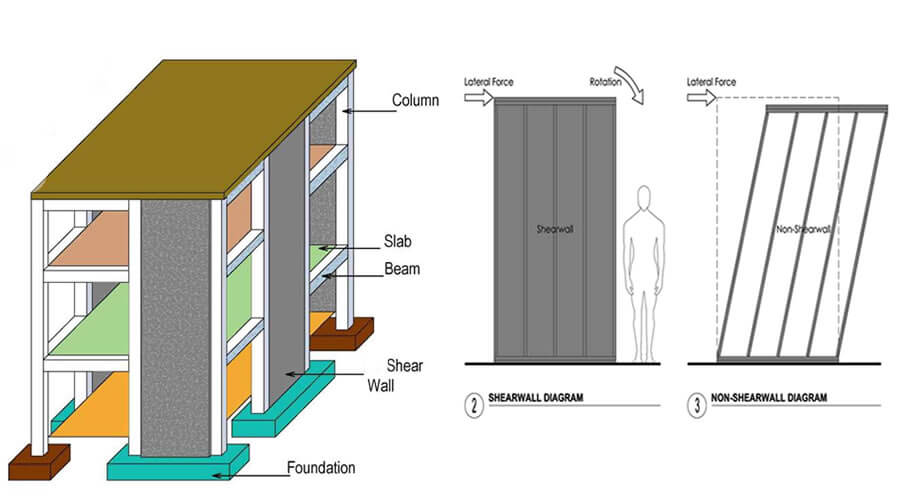 Seismic load (Earthquake) and Wind loads have a history of causing severe structural and non-structural damages. Therefore, from design stage, it is important to fortify structure, so as to minimize these damages. A structure must possess adequate strength to resist vertical loads, along with stiffness to resist the effect of lateral loads. No building can survive a major earthquake. Albeit, all types of structures, low rise and high rise, can be made to withstand lateral loads by taking certain precautions.

Generally, They are structural members, which its proper positioning at different locations in a building, from top level to foundation level, will ensure the building resists lateral loads. They can be constructed using various materials such as reinforced concrete, timber and reinforced masonry. However, in the united states, the use of Cross laminated timber (CLT) to construct walls and floors is becoming rampant. (Journal of Structural Engineering – Volume 143 Issue 12 – December 2017)

Shear walls offer resistance to wind load and seismic load by transferring all the forces to the foundation.

Shear wall contains openings because of the structure’s functional needs like doors and windows. Openings in a shear wall can cause reduction in the ability of the shear wall. A research renowned structural engineer on the behavior of shear walls with openings under seismic load shows that the size of openings and location of the shear wall in a structure affects the stiffness and seismic responses of a structure. Also, the research records that, as the size of the opening increases, the deflection and bottom stresses increase.

The distribution and shape of shear walls are essential to achieve maximum end result. Designing a shear wall for only one direction is not enough. This type of design ensures lateral load resisting in that direction alone.

Shear walls are very prominent in resisting lateral forces. Structural engineering firms must take into consideration the best position, size of opening and length of shear wall, for a structure, that offers the least displacement.

They provide the stiffness and strength of a building and resists lateral forces by transferring all the forces, caused by the lateral load, to the foundation of the building. They can be used as lateral load resisting systems and also retrofitting of structures. The positioning of shear walls in advantageous positions in the building, can form an efficient lateral force resisting system by reducing lateral displacements under wind loads and seismic loads.

Therefore, it is important for a structural engineer to determine the effective, efficient and ideal length of shear wall, and position of shear wall.