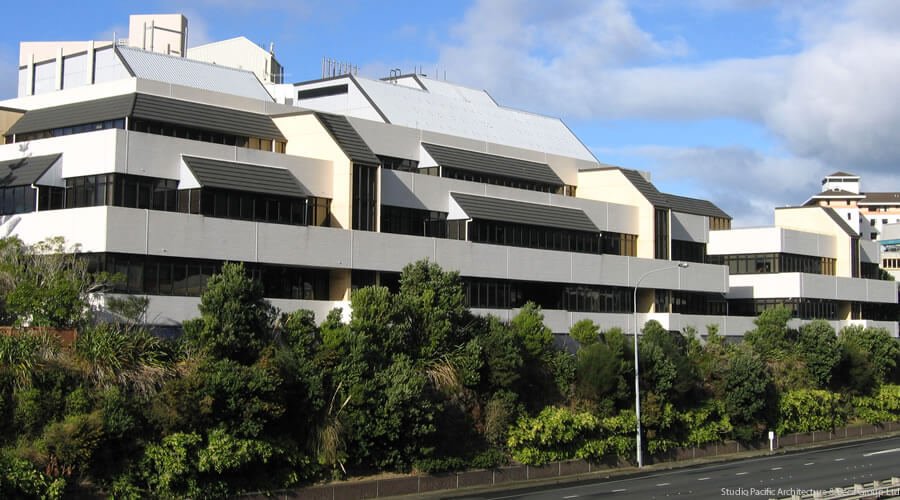 How to design earthquake proof buildings

What is an earthquake?

The shaking of the surface of the earth as a result of the damaging effects of waves which in most cases results in the sudden release of energy in the earth’s crust – this is the meaning of earthquake means. Sometimes, earthquakes may be weak in the sense that they do not impact the earth’s surface, thus producing no violent tremors that test the structural strength of buildings around.

The earth’s crust and solid surface of the earth under the sea consist of light rocks staying on the smooth center of the earth which is made up of heavier molten rocks and iron. These light rocks come in pieces, existing on their own by faults and trenches or pushed together into mountains. They can be influenced by convection current in the big molten core including gravitational and centrifugal forces coming from the sun, moon, and earth’s rotation.

When putting together, these forces push the plates into motion, especially in the trenches located in the mid-ocean where molten materials force the plates until they break.  Other forces hit head-on into each other producing mountains such as the Himalayas of Asia. On the other hand, others move over each other as seen on the west coast of the Americas, where the land plates are moving over the thick ocean bed plates.

In another situation, such as what is happening in San Francisco where the tectonic plates are bumping together over each other, coming together while at a fault line, usually in unity with moving under or over. These sliding and bumping are what cause earthquakes.

What makes buildings collapse during earthquakes?

Earthquakes are disturbances in the ground which can occur as single, sudden movements or a series of shock waves. In most cases, structures around the vicinity affected may fail to hold their weight in the face of higher magnitude earthquakes due to structural constraints. 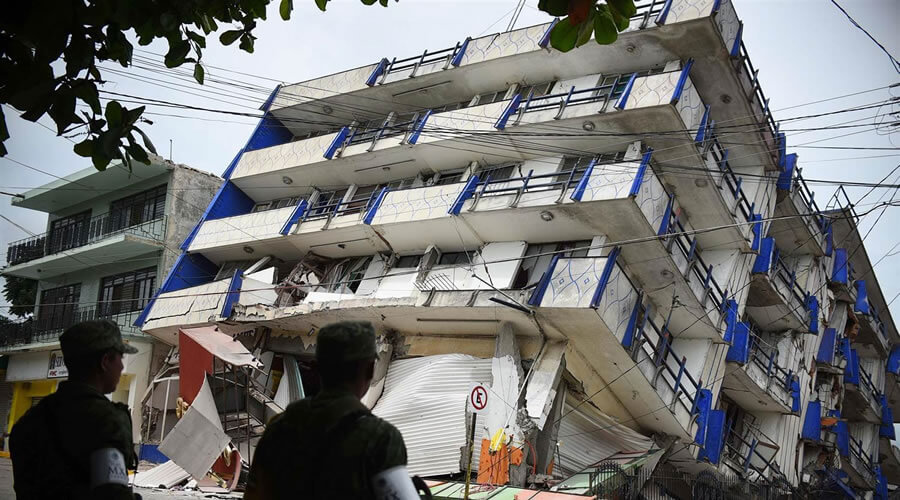 The difference in earthquakes lies in the magnitude of disturbances that affect the foundations of the side structures. Most earthquakes occur from side to side, unlike floods and snowstorms which affect buildings vertically. This explains why most “supposedly solid” buildings would collapse during an earthquake. This is because an earthquake-proof building design wasn’t taken into cognizance during the construction process.

In most multi-story buildings, the floors and roofs rest solely on the walls, held there by their own weight; and if there is any structural framing, it is too often inadequate. This inadequacy can result in a floor or roof falling off its support. Most times more weight is added to a building or structure at a high level, which may cause the bonding of the small steel bars which bind the main reinforcement together with the concrete to weaken, resulting in the outer concrete crumbling, making the main reinforcing bars bend outwards away from the column and causing the building to lose its structural strength.

This simply means that structures that are not able to withstand side to side loads will certainly fall in the event of an earthquake, the main disadvantage of such a default is the fact that this structural weakness can only be discovered when an earthquake hits, and by then, there isn’t much that can be done about it.

How can we construct earthquake-resistant buildings?

Thanks to modern technology and the application of earthquake engineering, it is now possible to Earthquake-proof building in such a way that their structures and foundations are able to resist the side to sideload that may lead to their collapse during an earthquake. Here are a few things your structural engineer should take into consideration. 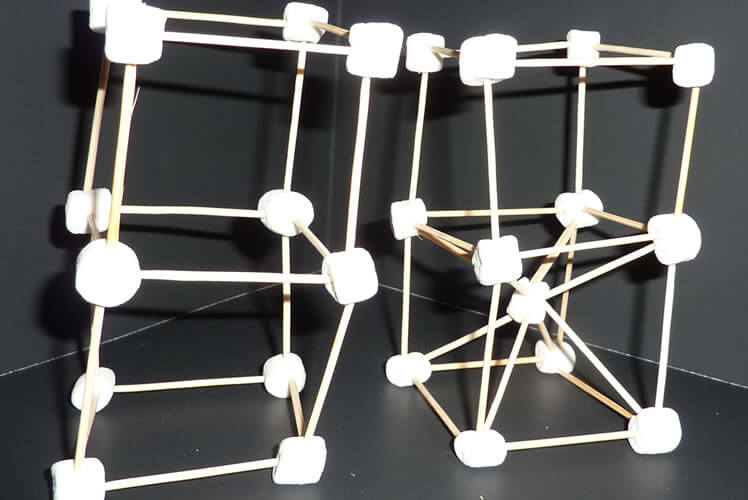 When designing earthquake-resistant buildings, structural engineers recommend adequate vertical and lateral stiffness and strength especially laterally. Most buildings handle the vertical disturbances caused by quakes better than the lateral, or horizontal, movement. it is therefore of utmost importance that these buildings are constructed such that when earthquakes introduce new directional forces, the structures will be able to absorb the energy efficiently.

Regularity in structural terms refers to the movement of the said structure when moved in lateral directions. Safety professionals and structural engineers should ensure that buildings move equally, to enable seamless dissipation of energy from the quake without placing too much force on one side or another. If a building is irregular, the weaknesses will become quite evident when the building sways.

This is one of the most important factors to consider, as redundancy ensures there are multiple strategies in place in case one fails. These can potentially add to the building cost, but redundancies will prove their worth when a natural disaster such as an earthquake occurs. Structural engineers should ensure the equal distribution of mass and strength throughout the structure so that its strength isn’t dependent on only one factor. Inlay man’s terms “don’t put all your eggs in a basket”

A stable foundation is of the utmost importance when building a large structure regardless of the earthquake risk associated with the said structure. This is largely due to the role of a structure’s foundation in its long-term survival. A stronger foundation is more likely to deal with earthquakes a lot better. Different areas have unique foundational requirements that define how a structure’s base needs to be reinforced. Buildings designed to withstand violent earthquakes have deep foundations and driven piles, so to stabilize these rigorous forces. Structural engineers must ensure that the foundations are connected so they move as a unit.

Design and Construction of Earthquake-Proof Buildings

In earthquake-proof building designs, the diaphragms are a key component in the building’s structure. They include the floors and the roofs; structural engineers should ensure to place each diaphragm on its own deck and strengthen it horizontally so it shares sideways forces with the vertical structural members. At the roof, where a strong deck isn’t always possible, engineers need to strengthen the diaphragm with trusses (diagonal structural members inserted into the rectangular areas of the frame) 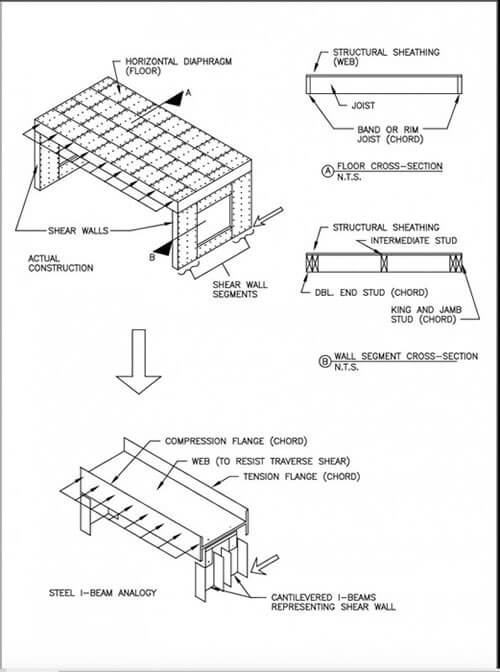 For the vertical structural system of a building which consists of columns, beams and bracing which functions to transfer seismic forces to the ground, structural engineers should build walls using braced frames, as they rely on trusses in a bid to resist extreme sideways motion. Wall trusses should be built using cross-bracing, which uses two diagonal members in an X-shape, instead of braced frames. Or perhaps in addition to them, they can use shear walls, which are vertical walls that stiffen the structural frame of a building and help resist rocking forces. Despite their advantages, shear walls may limit the flexibility of the building design, in a bid to overcome this, structural engineers can make use of moment-resisting frames. In such buildings, the beams and columns are given the liberty to bend, hence the joints or connectors between these beams and columns are rigid. This causes the entire frame to move in response to a lateral force while providing an edifice that’s less obstructed internally than shear-wall structures. 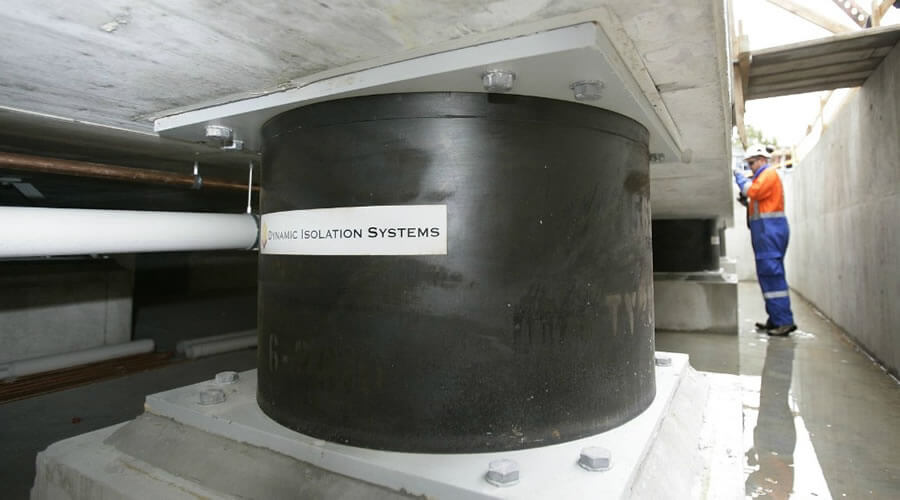 For the foundation base of the structure, isolation should be employed, this involves the floating of a building above its foundation on a system of bearings, springs or padded cylinders. Structural engineers can use a variety of bearing pad designs, though the lead-rubber bearings, which contain a solid lead core wrapped in alternating layers of rubber and steel are commonly used. The lead core ensures that the bearing is rigid and robust in the vertical direction, while rubber and steel bands keep the bearing flexible in the horizontal direction. These bearings are attached to the building and foundation using steel plates giving room for foundational movement when an earthquake hits, allowing the foundation to move without moving the structure above it.